So I watched Me Before You.

Not bad at all! The movie never strayed from the main plot line, and I understand that they had to omit some other details. THANKS, JO JO MOYES.

Have you read? Have you watched? Have you emotions? Which one of Louisa Clark’s outfits is your favorite?

Title: A Court of Mist and Fury (A Court of Thorns and Roses #2)

Feyre survived Amarantha’s clutches to return to the Spring Court—but at a steep cost. Though she now has the powers of the High Fae, her heart remains human, and it can’t forget the terrible deeds she performed to save Tamlin’s people.

Nor has Feyre forgotten her bargain with Rhysand, High Lord of the feared Night Court. As Feyre navigates its dark web of politics, passion, and dazzling power, a greater evil looms—and she might be key to stopping it. But only if she can harness her harrowing gifts, heal her fractured soul, and decide how she wishes to shape her future—and the future of a world cleaved in two.
With more than a million copies sold of her beloved Throne of Glass series, Sarah J. Maas’s masterful storytelling brings this second book in her seductive and action-packed series to new heights. 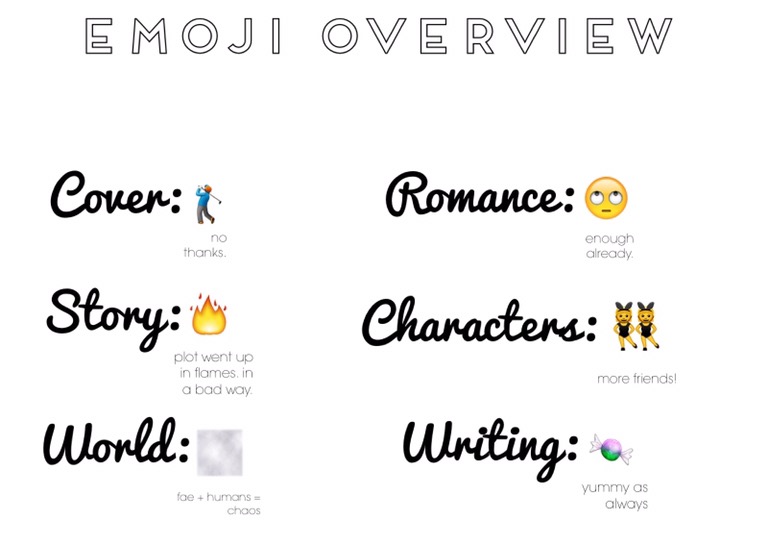 I am so very dissapointed.

Pro tip: Your book should have a plot. Just FYI.

AM I ALONE?! Am I the only one? Or are you in love with ACOMAF? Which is totally fine! You’re free to like whatever book you want! I’d love a to hear what you hated/loved about ACOMAF.

How do you punish an immortal?

By making him human.
After angering his father Zeus, the god Apollo is cast down from Olympus. Weak and disorientated, he lands in New York City as a regular teenage boy. Now, without his godly powers, the four-thousand-year-old deity must learn to survive in the modern world until he can somehow find a way to regain Zeus’s favour.
But Apollo has many enemies – gods, monsters and mortals who would love to see the former Olympian permanently destroyed. Apollo needs help, and he can think of only one place to go . . . an enclave of modern demigods

It was so good I’m not even going to complain that Apollo lost his eight-pack!

Title: Rebel of the Sands

Author: Alwyn Hamilton (which is only a few letters of from ALEXANDER Hamilton)

She’s more gunpowder than girl—and the fate of the desert lies in her hands.

Mortals rule the desert nation of Miraji, but mystical beasts still roam the wild and barren wastes, and rumor has it that somewhere, djinni still practice their magic. But there’s nothing mystical or magical about Dustwalk, the dead-end town that Amani can’t wait to escape from.

Destined to wind up “wed or dead,” Amani’s counting on her sharpshooting skills to get her out of Dustwalk. When she meets Jin, a mysterious and devastatingly handsome foreigner, in a shooting contest, she figures he’s the perfect escape route. But in all her years spent dreaming of leaving home, she never imagined she’d gallop away on a mythical horse, fleeing the murderous Sultan’s army, with a fugitive who’s wanted for treason. And she’d never have predicted she’d fall in love with him…or that he’d help her unlock the powerful truth of who she really is.

Arabian nights, witty dialogue, and character development. These are a few of my favorite things AND THIS BOOK HOLDS THEM ALL.

Do you know of any witty books you could recommend to me? Some Arabian Nights fantasies? Or perhaps Indian inspired fantasies? COME DISCUSS EVERYTHING WITH ME.

Thank you to St. Martin’s Griffin for providing a review copy! This in no way melts away my judgemental, grumpy reviewing skills.

It’s 1989 and Rae is a fat, boy-mad 17-year-old girl, living in Stamford, Lincolnshire with her mum and their deaf white cat in a council house with a mint off-green bath suite and a larder Rae can’t keep away from. This is the hilarious and touching real-life diary she kept during that fateful year – with characters like her evil friend Bethany, Bethany’s besotted boyfriend, and the boys from the grammar school up the road (who have code names like Haddock and Battered Sausage).

My Fat, Mad Teenage Diary evokes a vanished time when Charles and Di are still together, the Berlin wall is up, Kylie is expected to disappear from the charts at any moment and it’s £1 for a Snakebite and Black in the Vaults pub. My Fat, Mad Teenage Diary will appeal to anyone who’s lived through the 1980s. But it will also strike a chord with anyone who’s ever been a confused, lonely teenager who clashes with their mother, takes themselves VERY seriously and has no idea how hilarious they are.

A noble effort, simply not for me. BUT BONUS POINTS FOR THE BRITISH THING THOUGH.

What British books delight you? How has literature affected your perspective?

“Our Dragon doesn’t eat the girls he takes, no matter what stories they tell outside our valley. We hear them sometimes, from travelers passing through. They talk as though we were doing human sacrifice, and he were a real dragon. Of course that’s not true: he may be a wizard and immortal, but he’s still a man, and our fathers would band together and kill him if he wanted to eat one of us every ten years. He protects us against the Wood, and we’re grateful, but not that grateful.”

Agnieszka loves her valley home, her quiet village, the forests and the bright shining river. But the corrupted Wood stands on the border, full of malevolent power, and its shadow lies over her life.
Her people rely on the cold, driven wizard known only as the Dragon to keep its powers at bay. But he demands a terrible price for his help: one young woman handed over to serve him for ten years, a fate almost as terrible as falling to the Wood.
The next choosing is fast approaching, and Agnieszka is afraid. She knows—everyone knows—that the Dragon will take Kasia: beautiful, graceful, brave Kasia, all the things Agnieszka isn’t, and her dearest friend in the world. And there is no way to save her.
But Agnieszka fears the wrong things. For when the Dragon comes, it is not Kasia he will choose.

Honestly, we can’t even be friends if you don’t read this book.

I will bake you a pie. Perhaps also a biscuit.

What magical books have you read recently? Any high fantasy recommendations? Do you prefer magic in your books or real-life situations?

Princess Eadlyn has grown up hearing endless stories about how her mother and father met. Twenty years ago, America Singer entered the Selection and won the heart of Prince Maxon—and they lived happily ever after. Eadlyn has always found their fairy-tale story romantic, but she has no interest in trying to repeat it. If it were up to her, she’d put off marriage for as long as possible.

But a princess’s life is never entirely her own, and Eadlyn can’t escape her very own Selection—no matter how fervently she protests.
Eadlyn doesn’t expect her story to end in romance. But as the competition begins, one entry may just capture Eadlyn’s heart, showing her all the possibilities that lie in front of her . . . and proving that finding her own happily ever after isn’t as impossible as she’s always thought. 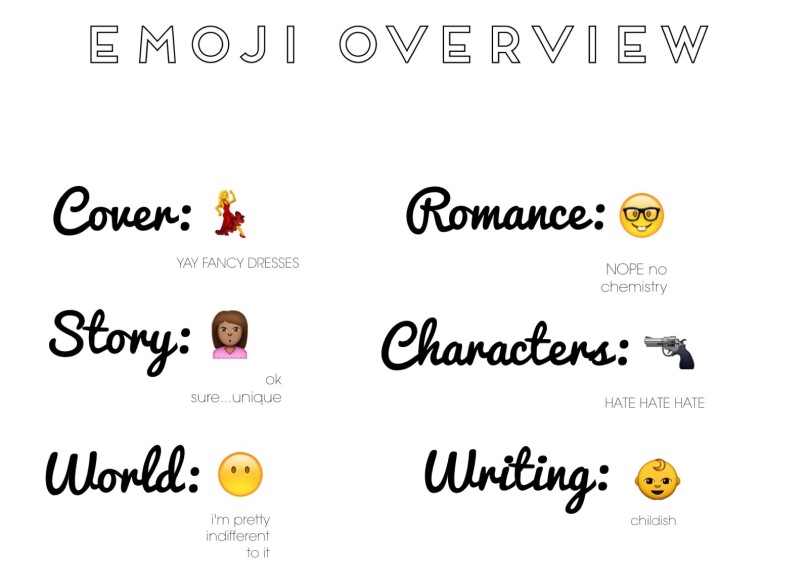 What characters have you mentally committed murder too? If you have an answer to that question, a) next time, use your words and b) have you considered therapy?

Prince Magnus has just witnessed torture, death, and miracles during the bloody confrontation that decimated the rebel forces. Now he must choose between family and justice as his father, the cruel King Gaius, sets out to conquer all of Mytica. All Gaius needs now are the Kindred – the four elemental crystals that give godlike powers to their owner. But the King of Blood is not the only one hunting for this ancient, storied magic…

• THE KRAESHIANS join the hunt. Ashur and Amara, the royal siblings from the wealthy kingdom across the Silver Sea, charm and manipulate their way to the Kindred, proving to be more ruthless than perhaps even the King of Blood himself.
• THE REBELS forge ahead. Princess Cleo and vengeful Jonas lead them, slaying with sweetness, skill, and a secret that can control Lucia’s overpowering magic – all so they can use the Kindred to win back their fallen kingdoms.
• THE WATCHERS follow Melenia out of the Sanctuary. They ally in the flesh with King Gaius, who vows to use Lucia’s powers to unveil the Kindred.
The only certainty in the dark times is that whoever finds the magic first will control the fate of Mytica… but fate can be fickle when magic is involved. 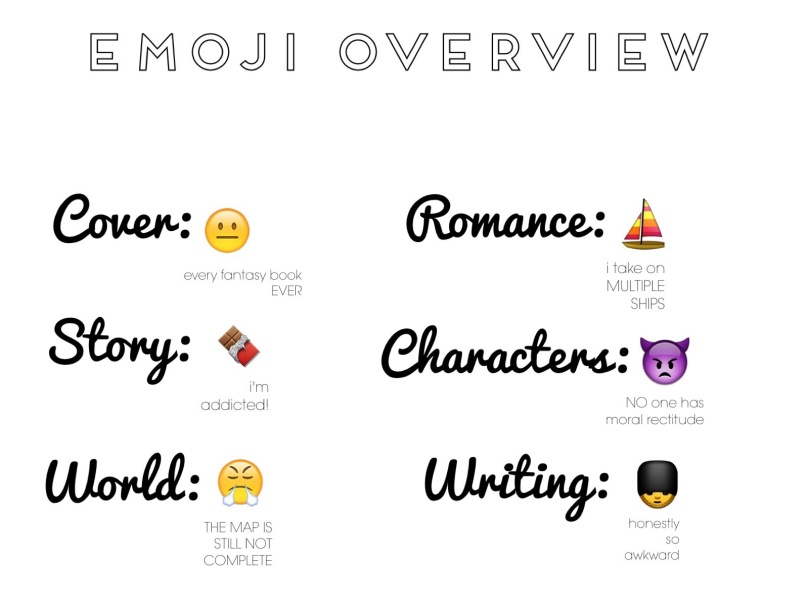 THE DRAMA IS ADDICTING, the book incites passion. Alas the writing is atrocious and the technical errors are plentiful.

Is fluffy fantasy a thing? Because it is now. You’re welcome, friends.

Do I ever write a review without a Les Miserables gif? (No. No I do not.) Are there any cocaine flavored books I should know about? (Hugs not drugs.)

Title: The Love That Split the World

Natalie Cleary must risk her future and leap blindly into a vast unknown for the chance to build a new world with the boy she loves.

Natalie’s last summer in her small Kentucky hometown is off to a magical start… until she starts seeing the “wrong things.” They’re just momentary glimpses at first—her front door is red instead of its usual green, there’s a pre-school where the garden store should be. But then her whole town disappears for hours, fading away into rolling hills and grazing buffalo, and Nat knows something isn’t right.

That’s when she gets a visit from the kind but mysterious apparition she calls “Grandmother,” who tells her: “You have three months to save him.” The next night, under the stadium lights of the high school football field, she meets a beautiful boy named Beau, and it’s as if time just stops and nothing exists. Nothing, except Natalie and Beau.

Emily Henry’s stunning debut novel is Friday Night Lights meets The Time Traveler’s Wife, and perfectly captures those bittersweet months after high school, when we dream not only of the future, but of all the roads and paths we’ve left untaken.

Nice try, book. But you’re entirely pathetic. Sorry sorry I’m too mean.
What insta-love romances have you found to be terribly done?

Simon Snow is the worst chosen one who’s ever been chosen.

That’s what his roommate, Baz, says. And Baz might be evil and a vampire and a complete git, but he’s probably right.

Half the time, Simon can’t even make his wand work, and the other half, he sets something on fire. His mentor’s avoiding him, his girlfriend broke up with him, and there’s a magic-eating monster running around wearing Simon’s face. Baz would be having a field day with all this, if he were here—it’s their last year at the Watford School of Magicks, and Simon’s infuriating nemesis didn’t even bother to show up.

Carry On is a ghost story, a love story, a mystery and a melodrama. It has just as much kissing and talking as you’d expect from a Rainbow Rowell story—but far, far more monsters.

WITTY. ADORABLE. Wonderful, original nuances fluttering about. But the beginning? Too slow and too similar to Harry Potter.

Who are your favorite witty characters? Have you read any truly loathsome Harry Potter rip-offs?